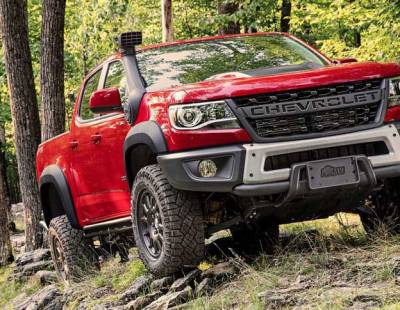 483060004AA
AEVs ZR2 Bison Fender Flares are now available for the 2015+ Chevy Colorado. These injection molded Fender Flares were designed specifically for the ZR2 Bisons appearance package, so they are recommended to be used in conjunction with our Bison Front Bumper.

However, they can also be used with the ZR2s factory bumper (please see pics in the FAQ). These Fender Flares feature an OE acid-grained texture and are the same width as the factory ZR2 Fender Flares, but sit much higher on the body, giving your truck a much more aggressive appearance. Drilling is required for installation but an easy to use template is provided for added convenience. Since these trucks have been growing in popularity as a viable vehicle platform for overland travel, AEVs ZR2 Fender Flares are sold separately in sets of two, so custom builders can order just the front set.
Pricing: $330.00